There’s a new ludic wind blowing at the door. After testing the Age of Vikings and surrender to the quality of the system, I got to wait a few month for another version of this magnificent game. Since I’m not that much interested in purely historical universes, and having a substantial collection of fantasy miniatures, Saga: Age of Magic bring me a lot of hopes as for my return on commanding tabletop armies.

So what about this? I tend to trust Studio Tomahawk with my eyes closed (and my wallet open), may they wrote the ruleset or just translate it, each of their production are a delight to my picky gamer soul. The Saga system is an ingenious ruleset convertible to different medieval era, and the latest iteration focuses on magic (as in the title I know, captain obvious here…). Meaning a fantasy setting where monsters and wizards fight along more conventional troops. But like Frostgrave begore it, there’s not that much of official minis range, nor than any big background settings, allowing you to produce any miniatures you wish to represent any of the six generic army lists. This mean that no armies will look the same, and that you can manage to express any crazy idea you ever had about weird thematic armies. Or just replay your classic themes but with a brand new and seriously nice ruleset!

The Saga activation system is not that easy to handle, but boy this is fun an rewarding to manage. The core rules of Saga is a light system with no approximation whatsoever, but it’s not to be mistaken with simplicity. In every ages of Saga, the complexity came for the list you choose to play, giving you access to specific options (thus every type of units got the same stats), and much more important, your faction board, showing all the specific order, activation and bonuses you can gave to your troops. This is the heart of the game, where the metagame is coming to life. 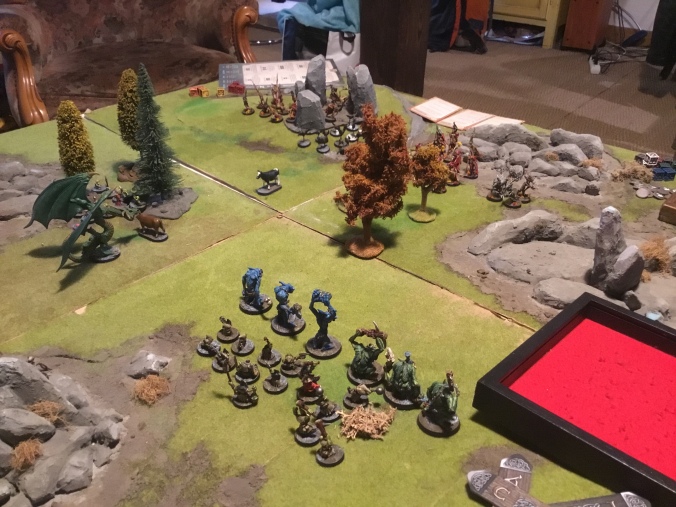 But it’s a while since I only spoke about narrative gaming and the lack of interest I got for competitive play. But this time it’s not a problem, since this system is in my point of view much more elegant than any other. You don’t win this game based on your list, or the crazy batshit furious combo that you planned home and will work against anything. No, here there’s a few units, a few stats, no real powerplay, but the need to adapt, to efficiently use your actions’ and manage precisely the ressources at your disposal. That for me makes a great game! But it also can be really immersive and narrative. The addition of the scenarii book is a must have, and I can’t imagine being able to play all the features in it before ages. 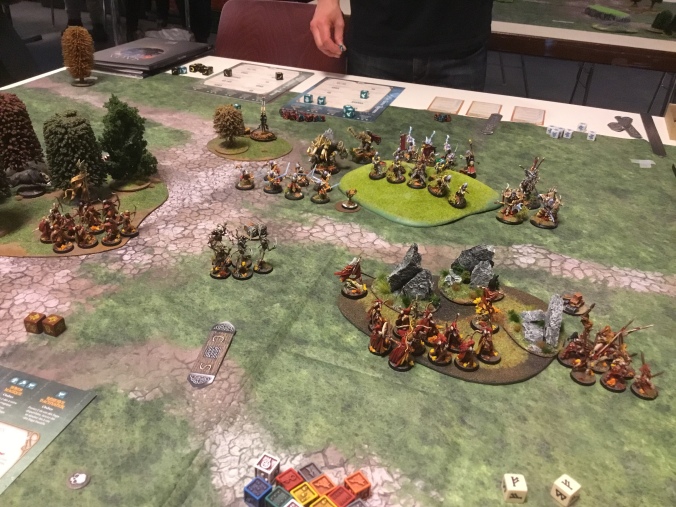 However, you can find a few flow to this age. Having only played Age of Vikings before, i can say that I found Age of Magic a bit less deep an subtle than historical settings. Meaning the boards play a bit much straight forward (when they’re not brainless as the Horde). The multiplication of profiles also tend to dilute the simple aspect of the stats. A pinch of antimagic could have been nice to, since there’s absolutely no way to counter it, and the spells never fails. But that’s no problem compared to the huge amount of fun I found in this game.

You can either play it really seriously or abord a more light hearted way, play narrative list and scenario or balanced and strategical game, you’ll find what you want there (at least I do). Plus you got to play whatever the hell you want, even your old collection that never lived the shelves in ages. I for myself get to play it just by buying the books and dices, with armies I own, some of it for maybe fifteen years. What a deal!

So try this, try the others ages, try every games from Studio Tomahawk, it’s good for your health and it’ll make your teeth shine!