So after talking about my recent interest for Saga, the logical next step was obviously to add a few projects to the current ones. I got to dig a bit to exhume this load of plastic and lead, laying around for maybe fifteen years. An early stage army from 2002 I guess, never got to paint them all, now here’s the chance.

A few glanzer bathes later and get myself hours of painting ahead (I’m not gonna try to tell I don’t like it). In the pic you can see my original list, but we all know it’s never enough. Old gwists like me knows we like to try each en every entry for the armies we play. So before soon i add many other stuffs to these, and ended up planning a few other compos for a few other factions (more on this later). But in a way, this project cost me very few since I started with almost everything in my possession (meaning I already bought it a long time ago), just to add a few quadruped creatures and maybe planning on acquire flying monsters or warchief options, but that’ll do for the time being. 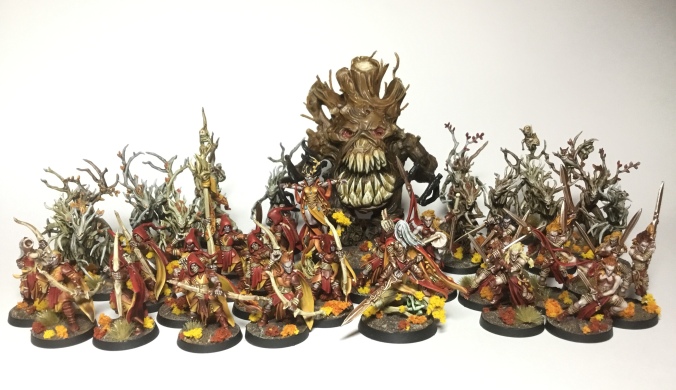 I’ve managed to take these down in a bit more than a month, and I glad of how they look on the battlefield. Many references from the early 2000’s Wood Elfes range, with a few additions here and then. I think I gathered maybe sixteen points or so, which allows me to try many different combinations.

I’ll make another post about the board that get along with the thematic, saying I couldn’t come to make another super green wood elves army. It’s not that much of originality, but I skip to another season, and the fall palette was to much enjoyable to think of anything else. So here it is with load of yellow, orange and red, with natural browns and raw whites. The process was really easy, a bright set of bases, global shade (back to the agrax babe!), one highlight per tone, of few efforts more on character, and hours of foliage gluing. I haven’t paint a whole army in ages and it brings back memories of youth (even if I’m now eager to go back to lesser series), and it gave me some times to think about background.

This edition of Warhammer Wood Elves depict them not as kind folks eating lettuces, but much more as wild being living an arsh environment. I like this idea of Wild Elves rather than Wood Elves, and I tend to think of them as feral beings, maintaining a fragile status quo with untamed inhabitants of the wild. For me they raid the country for food and plunder, as their magical territory enters the fall of their existence, and they need to gather ressources before the winter to come. So not so good willing people at all, just savage who’re not afraid to take what they need to neighbors kingdoms, even in for a little baby exchange program from time to time…

So for the pics…

That much Archer Warriors. It’s unlikely that I ever play all of them in Saga, but I would let just a few of them unpainted on the side of the road. And who knows when I’ll need to play them in another system. They’re the basic expression of my paint scheme. Leather are dark reddish brown, coats an capes red, and the fabrics composed in yellow, orange and the very same red. Metals are primitive bronze or copper. The wood for weapons is pale for the contrast, and for the same reasons and the lore, I gave them pale skin with shades of blue or purple. The fall is starting to weaken them as the cycle goes forward. 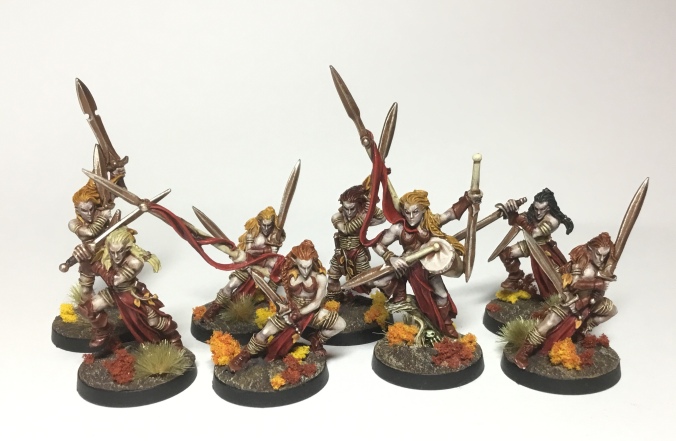 Those Wardancers will be played as simple Warriors, since you always need one point of them, easy to activate, good at keeping objectives, they’ll do a fine work. 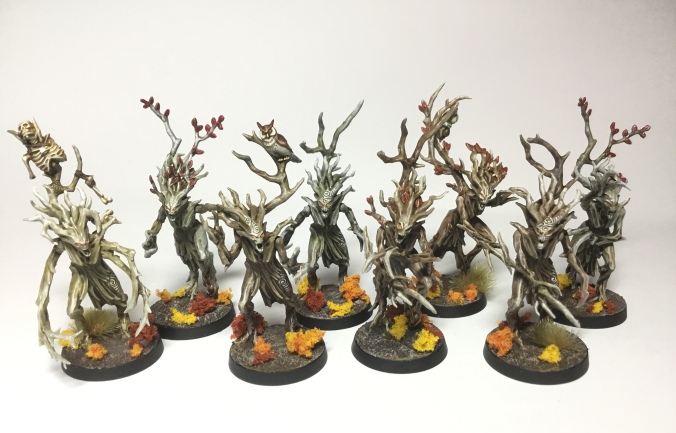 Dryads can be either Warriors or Hearthguards. Once again to much minis, but at least they’re all done. I already got something in mind for them in another game… I didn’t want them purely brown, so I work with various greys and added green washes to those tree folks. 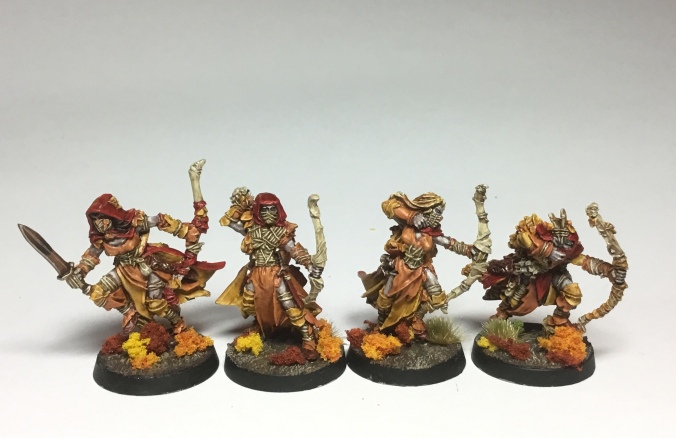 Pathfinders will be played as Hearthguards with bows. Not really convinced of their efficiency, but I got these minis and they were only four so…

Glade Riders are my new favorite unit. Mounted Warriors with short bows, they can play a few tricks and are really mobile. Shame it is simply impossible to find some to buy these days, I would love to form another unit.

A Swarm Levy made of various bits, not only WE imps… A fun unit to paint and to play with. Not that powerfull, but it can take a few hits and is also easily manœuvrable. 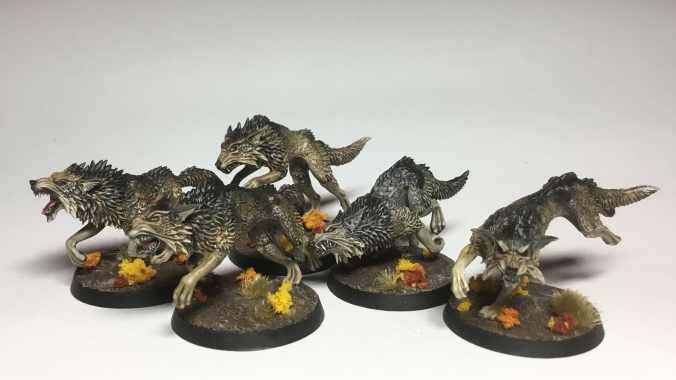 Fenrisian Wolves will assume the role of Quadruped Creatures, answering the the call of the wild hunt. Here again, many other uses for those minis, from rpg to skirmish games.

The ancient Treeman comes along with his Dryads court, playing either a monster, or some of the special abilities of my army (such as Transformation for the mage, or the dreaded (but expensive) forest terrain attack!). It’s an oop mini from Ultraforge. Back in 2002, I can’t stand the GW official one, so I cut to this characterful angry vegy monster instead.

I use them two as Lieutenants. I paint the banner before getting to read the book, where sadly there’s no rule for it. The second one is my Pathfinder, which I can’t play enough with. 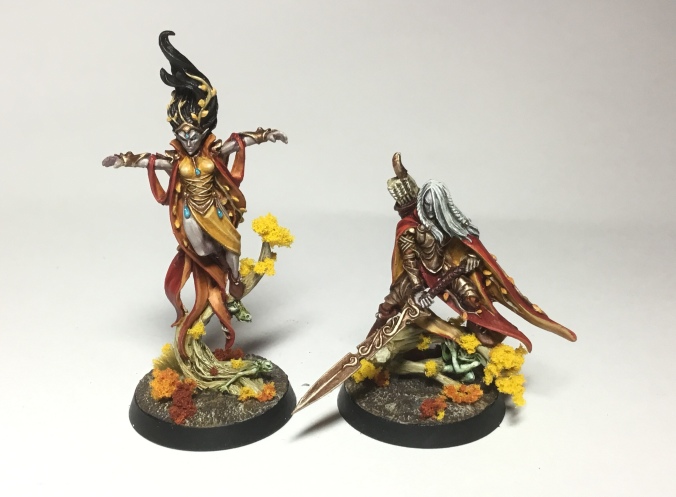 Finally the true Lords of Fall, my Sorceress and Warlord. They already accomplished great deeds on the battlefield, but I’m planning for mounted versions of both of them (since I don’t get to much to do…).

So this bring me to roughly fifteen army points, which is way to much for this game, but I got at least five more on the workbench, can’t help myself (gotta fill all these entries in the book!). Not to mention all the missing units in my Night Goblins Horde army. That said, I think that’s the first time in a while I got to play so often with recently painted models. And with a thematic board to go with them. More on this soon. 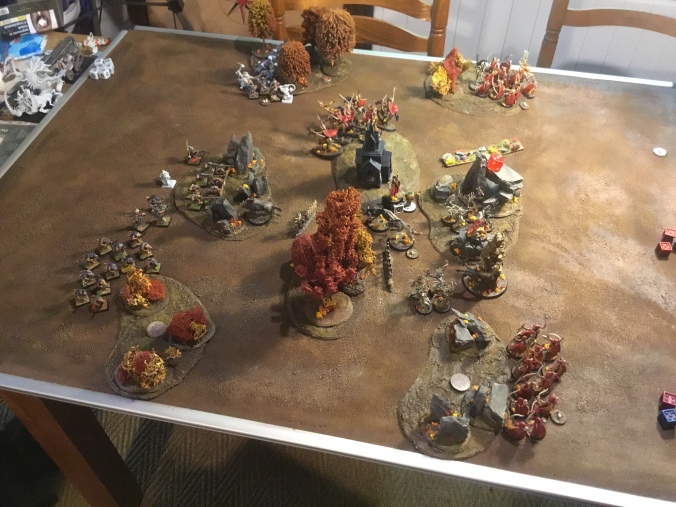 2 réflexions sur “Lords of the Fall”