In addition to Nids, a got a couple of various periods Eldars hanging around the desk, result for the eternal interest for old lead, which were given away in diverse occasions. That right, none of these were bought, rather offered or traded along the way. And the combination of these lucky finds ended up in this little project! 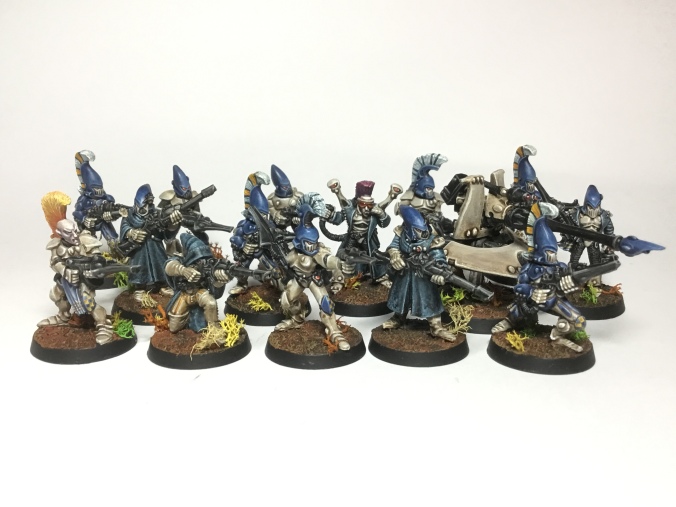 A full lead Killteam with attitude! I’ve been working on a desatured palette to visually oppose them to my Behemoth previous Killteam. Dirty pale ivory and grayish blue, I want to gave the feel of hardened vets who are on the field for to long. A few colored touches gave some dynamics to the whole, and the helmets received a blue glaze to brighten and focus this point of the minis. I gave them similar bases than my Tyranids, as they’re supposed to meet during next battles. END_OF_DOCUMENT_TOKEN_TO_BE_REPLACED

While I go ahead with my schedule of excavating the leadpile, I always find a way to add new projects to the existing ones (apparently it isn’t original at all), even though I’ve stop buying minis for a few month now (acquiring a few oldies via second hand market is really different from ordering the full range of an army in one order). That said, I’ve been dragged into Killteam with best intentions, such as « that’s a perfect occasion to play a new skirmish format with minis I allready own and paint ». Little I know…

So I ended up painting these, although I allready got the exact same team from my regular Nids fully painted. But the occasion was too great to bring back this old lead to colors. These models are my first, I mean litteraly, ever. I was maybe around ten or twelve years old when I decide to spend all my pocket money on tiny bits of metal. Discovering Alien saga at the time, I ended up with a few slimy xenomorphs. END_OF_DOCUMENT_TOKEN_TO_BE_REPLACED